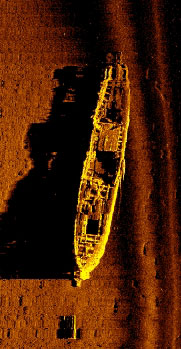 After the February 2001 earthquake in Seattle, NOAA and the USGS teamed up in a project to map the underwater geology of the Duwamish River delta (Elliot Bay, Seattle), the Puyallup River Delta (Commencement Bay, Tacoma) and the Nisqually River delta.  The multi-beam images they created are really interesting.

The one I will attach with this entry is of Elliot Bay, but I modified the file a bit to highlight points of interest:

The dotted line across the image is the major fault line that runs under the bay and then up through downtown Seattle.  The sharp ridges you see on the west side of the dotted line are very pronounced faults – I have seen them with my own eyes on prior dives in this area.  But until this image was created I had never known where they connected on the other side of the bay.  Turns out they line up pretty well with Pike and Pine streets in downtown Seattle.  When the ‘big one’ happens, it is going to be devastating.

Two of the circles on the north end of the image highlight some pretty big shipwrecks, both of which are in more than 300 feet of water.  Date of sinking, names of the ships, etc all unknown.  I’ve also circled a crater which looks very large.  It seems it was likely caused by a significant amount of ordinance – maybe during WWII.  I also circled in the NW corder of the bay what appears to be an unexplored wreck in shallow water.

The circles on the south end of the image are of three wrecks I have written about on this website, the MT6, the AJ Fuller & the Astorian.