Despite truly horrible viz in the lake take, JaWS Diver Scott Boyd was able to get a couple good shots of the Hauler this past weekend. 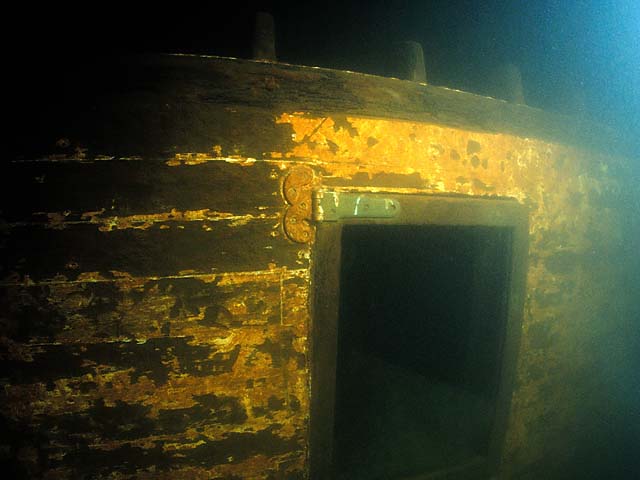 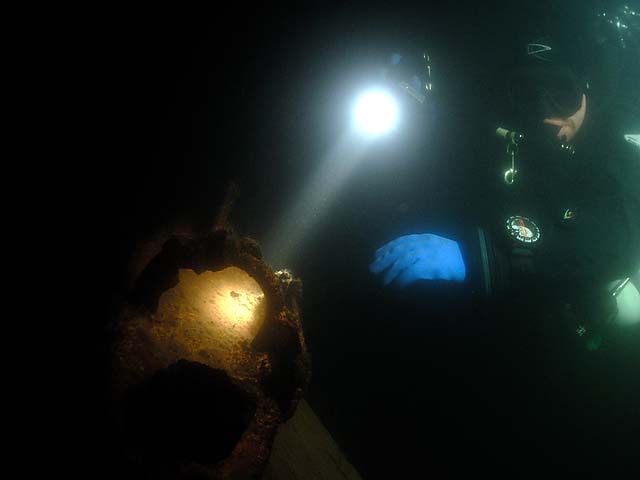 Additional image of the Hauler as recorded by the sonar crew today; great detail in the shadow of this image showing roof line, windows and open bow.

If you look closely at the top down view of the wreck you can see a rectangular opening in the mid ship. I dropped into this hole on the dive mentioned in the first post about the Hauler but I was focused toward the bow.  Divers on the wreck today discovered that entrance leads to a lower room back toward the stern complete with sink and mirror. 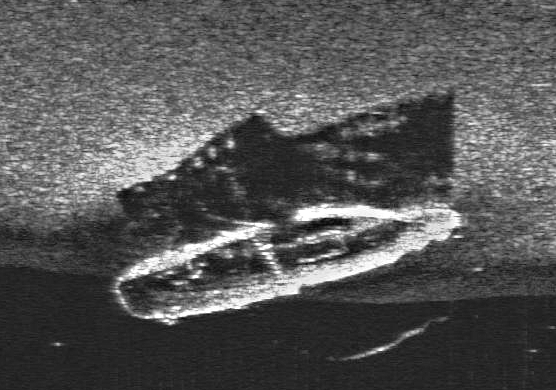 This past Sunday I hit the water with a new sonar crew operating on the lake.  Locally they are known as the ‘NAUI boys’ because of their training background.  The short story on them is they are a real solid bunch of guys, good DIR divers and they are using sonar equipment by Burton Electronics.

We focused on an area off Leschi pretty hard, looking for a specific wreck in that general location that we knew had been missing for almost 100 years.

By the end of day Sunday, we had spent about 6 hours on the lake.  It was raining really hard all day, and the wind was blowing some sizeable waves, but in their fully covered/enclosed 34ft boat we stayed pretty comfortable the whole time.  And by the time we left the water we were armed with the following sonar image, showing a shipwreck of about 60ft in length: 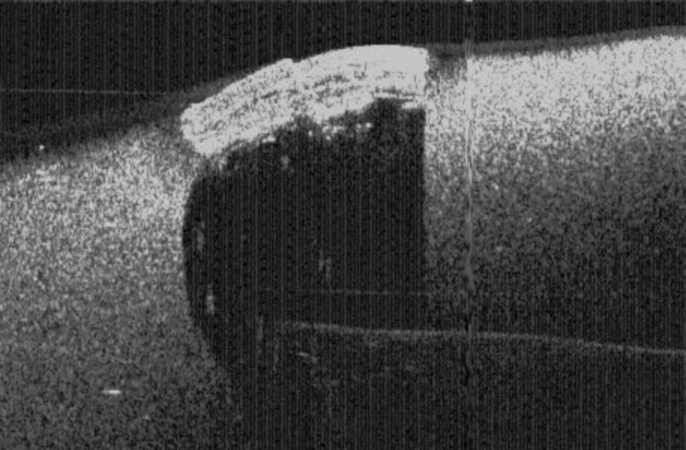 The image is somewhat grainy, but if you look at it closely there are a few things you can determine:
– Rounded stern (left side) – note roundness of stern in shadow
– Sonar passing through portion of stern – usually indicates windows or open deck with overhead structure
– Appears to have square faced cabin structure at the aft end of the ship
– Long open bow

Monday evening we made the first discovery dives on this wreck, which lies in about 120ft of water.

Pre dive I had somewhat convinced myself we had found the Acme.  The Acme was a passenger steamer that operated on the lake before the bridges.  It burned and sank off Leschi in 1908 and it happened to be 60 feet long – and there aren’t too many unfound 60ft wrecks in Lake Washington.

As it turned out this wreck appears to be an old hauler of some kind.  Possibly from the original Foss Launch and Tug Company.  I am guessing its era is from the 1920’s to 1940’s.  It has a round stern with no aft deck, square windows on the top portion of the cabin with additional portholes below.  A square cabin face with one door and then a large open deck that has a 4×6 sized opening in the middle and a closed metal hatch near the bow.  A wooden craft with large rudder and propeller still in place.

It will take some time to identify this wreck.  I am having trouble even locating a top-side photo of a boat that looks similar to this one.  It reminds me of a container ship shrunk down to 60ft in length.

One interesting note about the dive – we saw salmon all over this wreck; and they were aggressive.  We rarely see much life at all at the bottom of the lake, so it was unique to come across a half dozen salmon.

Special thanks to the NAUI Boys: Scott, Shaun, Marc, Greg & Ben on this one.  They were instrumental in locating the wreck, and the first divers to see this ship in what has probably been 70 or 80 years.