We conducted dive ops on the last of the three newly discovered targets in Lake Washington today.

Attached is the sonar image for Target1; now identified as the Phoenix.  The Phoenix rests in 200ft of water off Madison Park.  Her length is approx 50ft, width: 14ft, 9-10ft rise

Initially, from a read of the sonar image, I expected Target1 to either be an early century sailboat or, because of the square lines, a PBR type military craft.

In reality this one appears to be a work or fishing boat of some type, built for offshore use.  The construction is wooden, but the roof is reinforced with GRP (glass reinforced plastic).  There are ‘chain plates’ jutting upward on both sides like sets of metal ribs which look to have supported a small sail.

Guessing the boat was built no earlier than the 40’s, no later than the 60’s (based on general construction), but sank no earlier than the 60’s.  The later assumption made due to the presence of the GRP.  We also noted there was protection above the forward hatch, used to prevent breaking seas from entering the forecastle, as support for this boat being built for offshore use.

The Phoenix is very well intact, but generally stripped of equipment.  It has a large main cabin, as well as an aft cabin that extends nearly to the stern.  In the sonar photo what looks like what might be the stern of the wreck with a sail crumpled up behind is actually the back of the aft cabin with about 5 feet of semi collapsed stern deck behind.

All the cabin access points still house freely swinging doors with glass and brass hardware.  This is not a very common sight for sunken wrecks of Lake Washington.  Most of the cabin windows are still intact as well – a few broken, one with the circular break from a rock or baseball.  It is somewhat of an eerie feeling to be interacting with a wreck that hasn’t been seen for 45+ years, opening doors that have not moved since they last had natural light shining on them.  The first door I opened I half expected some(thing) inside to jump out at us.  : )

Inside there is a tarp or sail of some sort which looks like is covering something large, but not wanting to silt out the visibility for the video we were shooting today, decided against disturbing it.  Also inside the cabin, not visible unless you swim inside, is an old ‘pot belly’ stove.  Quite a nice find.

I hope to have photos of the wreck and some of its artifacts up on the website next week. 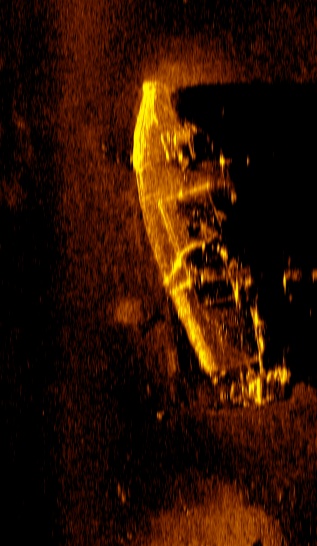 This past March, as part of research & exploration sonar work I was doing with Innerspace, we discovered three more shipwrecks in Lake Washington. All three targets are in depths ranging from 190 to 210 feet, and I expect all three targets to be of significant historical value.

Some high level details of the finds:

Target # 2
From reports of its sinking (general location), as well it’s dimensions & architecture, I believe Target # 2 is the remains of the SS Success.

The sonar for Target #2 is included below. While the image I include here does not capture the target’s shadow – which often reveals the most about a target – what you can clearly see with this image is that the stern is badly damaged, the wreck has cabin structure and it appears in the sonar that the front of the cabin is somewhat rounded. The wave in the image at the bow is caused by just that: a wave on the surface as we were scanning the target.

We made dives on Target # 2 this past Sunday. She is sitting in 195ft of water, bottom temp was a cool 44 degrees and visibility was surprisingly poor for this time of year. That said, we were still able to get good video of this wreck and we’ll make it available for viewing at 5th Dimension.

As is obvious from the sonar image, a significant portion of the stern has sustained heavy damage. Though from the dive, and later reviewing the video, there is no indication this damage was caused by fire or even collision. Instead it appears the wreck sank stern first and broke apart on impact with the bottom of the lake.