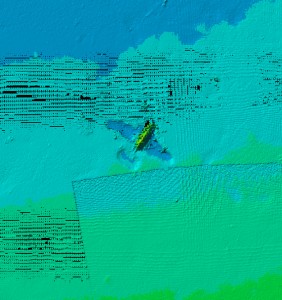 Noted comment within article: “The seaplane, badly damaged, was towed to shore.”

It is unlikely any substantial portion of this aircraft remains in the lake. But I would expect that as a result of crashing nose first into the water at a high rate of speed (from a fall that originated at 4000 ft) at least some of the wreckage remains in the lake.

General Info:
As Boeing became recognized as the leading designer of military aircraft, it received in 1923 a Navy order for the trainer Model 21, or NB-1 and NB-2. The company delivered 70 Model 21s in 1924 and 1925.

The NBs were produced in two batches; the first (NB-1) were powered by radial engines and the second by war-surplus V-8s still in the Navy’s inventory.

In 1897, a 65 foot wooden revenue cutter was built
at Port Townsend to patrol the waters of the Puget
Sound. The boat had a 9 ft. 6 in. beam and 5 ft. 5 in.
draft. She was powered with a compoundexpansion
steam engine, and her main tasks were
to deal with illegal immigration and drug smuggling.

In 1903, another wooden revenue cutter was built at
Astoria to patrol the waters off Oregon. This boat
had a similar design and similar dimensions to the
original Scout, but was reportedly only 62 ft. long.
This revenue cutter was originally powered with a
compound-expansion steam engine, and originally
named “Patrol.”

In 1915, the “Patrol” was completely rebuilt and
equipped with a three-cylinder, 50-horsepower
gasoline engine. At that time, she was renamed
“Scout” and transferred from Astoria to Puget
Sound, where she replaced the original “Scout.”

This new Scout was the fourth motor-powered craft
in Coast Guard service, exclusive of motor tenders
used by the large cutters. She was commanded by
Pilot Benjamin Lichtenberg.

The remains of one of these revenue cutters named
“Scout” are located in Lake Washington, off Yarrow
Point, in approximately 85 feet of water. The
wooden hull rests on its port side. The hull is intact
but empty. The name “Scout” is still legible on the
sides of the hull near the bow. It appears that the
vessel was stripped and then the hull was scuttled.

Included here is a photo of the USS Sumter APA-52, the ship that carried the Landing Craft PA-52 #22 which lies at the bottom of Lake Washington

Operating out of NAS Seattle at Sand Point, four Avenger torpedo bombers made a simulated torpedo attack on a target in Lake Washington, located near Meydenbauer Bay.

Three Wildcat fighters were simulating defense of the target.

The torpedo bombers were traveling east, toward Bellevue, at about 200 knots. The three fighters made an opposing run from ahead at about 300 knots. The pilot of one Wildcat held his attack too long to affect a safe recovery and collided with one of the Avengers. The fighter pilot continued west, toward Seattle, lowered his landing gear to slow his plane and bailed out. The Wildcat went into the lake off Leshi.

The damaged Avenger and other aircraft flew north toward NAS Seattle. According to Seattle Times cartoonist, Sam Groff, who was fishing
from a boat,

“I saw five planes flying in formation. There were three torpedo bombers and two fighters. Suddenly one of the bombers began to tip on
its right wing. It was getting lower and lower. The next instant it struck. The impact tore off the right wing.” (Seattle Times, August 18, 1942).

After the crash, the pilot, F. W. Janney of Philadelphia, PA, and top turret gunner, Charles W. Price of Houston, TX, managed to get out of the damaged
Avenger before it sank. However, the radioman/ventral gunner, Bernard J. Viscovich of Shamokin, PA, was trapped in the plane and
drowned.

Another eyewitness, Paul Moran, provided this account of the crash:

“I was on a sailboat near the crash site when it occurred. We had been to a marina in Houghton and were returning toward moorage between Juanita and Champagne Point. Someone aboard shouted “look at that plane!” and when I looked it was approaching the water at high speed and at a fairly steep angle. When it hit, the wings appeared to fold forward and all kinds of debris threw up spray ahead of it. A large piece of debris, which we thought was the propeller, cart wheeled across the water ahead of the fuselage. We saw what we thought to be the pilot thrown 20 to 30 feet into the air. We turned the boat around and proceeded to the crash site to see if there were any survivors. We found a person floating in his life jacket who was dazed and barely conscious. We could see another person also floating in the water some distance away that seemed to be in slightly better shape so we stayed with the first person to be sure he wouldn’t drown. We were afraid to bring him aboard because we didn’t know the extent of his injuries. We held him along side until a crash boat arrived from NAS Seattle which retrieved both persons.” (Personal Communication, December 3, 2004).

Of the 3 Minesweepers at the bottom of Lake Washington, only the YMS-359 was positively identified since their discoveries (the YMS-359 has 359 painted on the bow).

Now the guys over at pugetsounddivers.com are reporting they have identified one of the other two minesweepers and narrowed the identity of the third.

The least intact YMS in the lake is now identified as the YMS-416.

I tend to believe the most recent YMS to be discovered is the YMS-118 because the wreck we are diving has clearly been rebuilt into a fishing vessel. Note square windows of pilot house in prior posts – square windows are not ‘original equipment’ for any YMS as they all had round bomb-blast/porthole type windows.

The inconsistency with calling this YMS the -118 is that it reportedly sank in route to Alaska – so how did it end up at the bottom of Lake Washington?

In a joint effort with Scott Boyd of boydski.com we recently located a very nice 38′ fishing boat in the south end of Lake Washington.

This wreck is completely intact, which leads us to believe it foundered in some unexpected manner.

The incredible photos included here are taken by Scott Boyd who I consider one of the best underwater wreck photographers in the Northwest.