This past Sunday, in a joint effort between JaWS Marine and Innerspace Exploration, we located a previously undocumented Navy Minesweeper in Lake Washington. This ship is 130ft in length, 24ft wide and is sitting in 200ft of water off Sand Point/Magnuson Park.

The YMS designation stands for Yard class Mine Sweeper. These ships were used during WWII for near shore mine sweeping as means to prepare for amphibious based assaults. More detailed history on the YMS located here and here.

Dive and ROV operations have not yet begun on this ship, so we do not yet know which of the 481 YMS ships built during WWII we have located. Based on experience with the relatively well known YMS-359 also located in Lake Washington, as well as other submerged minesweepers, we’re hoping the white designation numbers will still be visible on the bow.

Included below are a few sonar images from our work on Sunday, as well as some YMS 3D modeling images courtesy of Infusion Studio’s 3D.

A few things to look for when comparing our sonar images to the model photos: the narrow, but tall pilot house, fenders on stern deck (these reflect very brightly in the sonar image), opening in hold where ‘spool’ use to sit, opening in hold at engine compartment (meaning engines were removed prior to sinking), forward mount for guns.

More on this one as the story unfolds; I hope to post underwater images here before the end of the year. 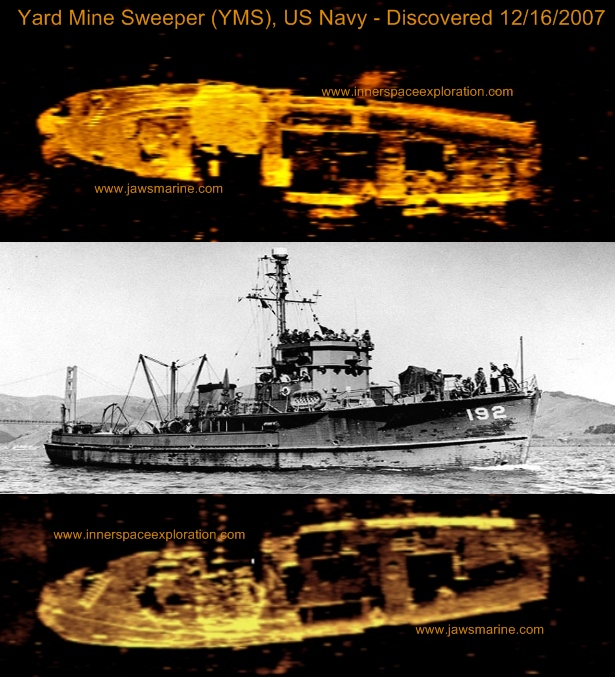