This past Sunday I made a dive with scret.org friends on the target previously described here as Target 3. This craft is approx 37ft long and is sitting in 200ft of water off Madison Park.

The exact identity of the wreck is unknown.  I’ve attached a side scan sonar image with this post so you can have a look – pay special note to the shadow of the sonar as it reveals quite a bit about the architecture of the boat.  You can clearly see the great condition of the wreck in the sonar image.  The entire cabin of this one is still intact.

Prior to diving this one, and based on what we were seeing in the sonar image, I expected this wreck to be a small steam tug.  At approx 37feet long it is too small to be a passenger ferry.

We were surprised to find on diving it that it was a gas powered craft – probably of the 30’s or 40’s. It could be that this wreck was a small work boat – or even a pleasure craft. As can be seen in the sonar image, the wreck is generally intact. The forward and aft cabins are still structurally sound, there is a small washroom sized area inside of the cabin, with its door off the hinges. A single porthole on each side gives peering opportunity into the forward hold.

There is no indication of how or why this boat sank; no sign of fire or collision. The guess is that it was intentionally scuttled as most of her equipment is gone.

I’ll post some underwater photos of this wreck, as well the SS Success, here sometime soon. 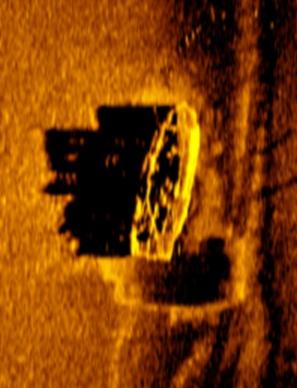